How to renew your au pair visa

So if you've decided that you just love being an au pair and everything that comes with it (free housing and transportation, the opportunity to experience another culture, having a constant and unrelenting headache, etc.), then you are probably thinking about renewing your visa like I did. I'm going to explain how I renewed mine in Paris, but note that the process is different in every city. France doesn't like to make things easy.

First of all, if you are planning on staying more than a year, make sure you've been doing everything right. This means going to school (okay really just paying for school) and going to your OFII appointment. If  you don't know what OFII is, then you fucked up, and you need to get your shit together ASAP. As for school, you will need documentation that you've been going to class and that you've received a grade. The school I went to gave everyone the same grade and attendance for the most part, so you don't have to worry too much if you've missed a few classes.

Okay, so you've been going to your classes and you've already gotten your little OFII sticker, so you're good to go so far. No more than two months before the expiration of your visa, you will need to make an appointment on the prefecture website. If you're in Paris, your appointment will be at Porte de Clignancourt a.k.a. the worst place in the world. I recommend making the earliest appointment possible and getting there before it opens. Student visas all tend to expire around the same time, so you do not want to be stuck there all day.

Because of all the required documents, I would suggest getting them together at least one month before your appointment. You will probably have to harass your French family to give you some of the paperwork, so you may as well start early. Here's the page (click on the link that says "renouvellement d'un titre de sejour etudiant") from the prefecture website of what you will need. I have put together a list in English of what au pairs will specifically need (I will go into detail about some of them after):


So let me point out that your new DIRRECTE contract does not need to be approved or stamped to go to your initial appointment at the prefecture. They will give you a receipt that will serve as a temporary visa for at least two months after the expiration of the original. After you receive your contract from DIRRECTE, you will then go back and get your fancy laminated Titre de Sejour (oh la la). With this you will feel so fucking French, you'll suddenly want to start protesting something - it's not important what, you just want everyone to know that one of them now, kinda.

For the translation of my birth certificate, I used a woman named Karen King. She only charges 35 euros, but did completely forget to send it to me. She was very nice about it and sent it out the day after I reminded her, but make sure you stay on top of it.

Also, you can take your passport pictures at any metro station in one of those little photo booths. It's only 5 euros for 6 pictures which I think is a pretty good deal considering how expensive it was in the US.

So that's what you'll need to renew your visa. It's not fun, and it can be complicated at times, but hang in there. The actual appointment(s) actually aren't so bad, so don't stress out like I did. Surprisingly everyone was really nice and patient with my broken French.

I feel like I've forgotten something, but I can't think of anything else. All and all, it took about 5 to 6 months for me to renew my visa, and now it's FINALLY over. If you have any questions or corrections, please leave a comment. I will do my best to help you with anything you need!

Posted by Unknown at Sunday, September 14, 2014 No comments:

Getting back into the swing of things

So if you haven't noticed, I haven't blogged since May (oh mon dieu)! Between working extra hours, English lessons, translating a book, and having a life, I just couldn't find the time or the will to write on my blog. So sorry for anyone dying to know about the dumb stuff I do on a regular basis.

I will start writing posts again though! I have had a few people (which is like 100 times more than I ever would have dreamed) tell me that they miss my blog. So I am motivated once again! My schedule hasn't calmed down at all, but you three people are worth it.

Anyway, I came back from the US two weeks ago to find myself working with the same family, friendless and completely broke. So I'm facing the challenges of getting back into the swing of things and making new friends, both of which I've desperately been avoiding. P.S. I'm not friendless because I have no social skills and drove away anyone who would dare talk to me (although maybe that's part of it...) The truth is that all of my au pair friends left at the end of the school year and now there are a whole new generation of nannies wandering the streets of Paris.

I also have a shit ton of paperwork to do. Spoiler alert! I'm going to write posts on how to renew your visa AND how to get PACSed! Don't you feel lucky.

Posted by Unknown at Friday, September 12, 2014 No comments:

Hello to whoever reads this!  So quick update: still no internet at my apartment thus I guess I'm officially posting about once a week until I get that situation sorted out.  I will probably be doing a 'My life without sans internet' post in the near future (it might be filled with angry rants and tears, so prepare yourself).

If you read my previous post Teaching English is Paris, you know that I do in fact give English lessons to a few Frenchies in Paris.  In that article, I had just started giving lessons, and now it's four months later.  I've learned a lot since then not to mention experienced a lot of weird people.  In this post, I would like to tell a few stories about the strangest, most uncomfortable English lessons I've had in the past four months.  Then we can laugh and be awkward together, it'll be fun!

About a month ago, I was contacted by a man who continuously called me "girl" on the phone and who found it completely appropriate to cancel last minute or call me in the middle of the day asking if we could meet in an hour.  Because, you know, I don't have a life, and my time is worthless.  As if that wasn't annoying enough, I'm pretty sure he only wanted lessons so that he could go on racist rants in English.  At least he was an equal opportunity racist because he hates almost everyone - gypsies, Spanish people, the Germans, and basically anyone who is not French.  At one point, he looked around to make sure no one was looking and said something along the lines of "we need to just get rid of all of them, I don't care where they go, they just can't be in France."  Needless to say, I have never cringed so much in two hours.  What made it worse is that we were in a touristy area which means a lot of people around us could speak English and understand everything he was saying.  I was completely mortified and could not wait to get away from him.  To make things even worse, he was supposed to pay me on Paypal which he still has yet to do. So basically I sat through a horrific, two hour racist rant for absolutely nothing.

I really dislike this man for many reasons, but the biggest one has to be the fact that about every twenty seconds, I catch him looking down my shirt.  Nice.  He is also one of the most boring men I have ever met, and making conversation with him is painful.  He seems to have absolutely no interests except for my chest of course, and any topics I bring up, he just shrugs and says something like "that is of no interest for me" or "I don't really care about that." So yeah, I'm not a fan, and I've started wearing turtle necks to his lessons.

I am not some super patriotic, America-is-the-best-and-everyone-else-sucks kind of person, but I do like being American.  Considering that's where I was born and raised, I will always love my country, but at the same time, I am very aware of our faults.  If you criticize the US about certain things, I will most likely agree with you.  However, that does not mean that I want to sit through an hour of America bashing, so that some old French man can "teach me a lesson" on how awful my people are.  I could mention any topic, and this man would find a way to personally blame me for the undoing of mankind.  Maybe I could bring up cute puppies.  His response would be that American's love for cute puppies is disgusting because we are too superficial and materialistic, and that one day there will be a mass genocide of ugly puppies because of me. Obviously that's a made-up exaggerated example, but sometimes that's how it felt to have a conversation with this man.

So I never met with this man, but I did receive I hate-filled rant about his love for Putin and his hate for America.  Because I'm obviously the spokesperson for the US, and after reading this crazy email, I would realize the errors of our ways.  I would then instruct my people to change their behavior and opinions, and they would abide.  Also, last time I checked, at the end of my ad, I didn't say "Fuck Russia, go America," so I didn't really understand why I was the target of this rampage.  The best part was that he spelled Putin wrong throughout the entire email, instead spelling it "poutine," the heart-attack inducing traditional dish of Canada. 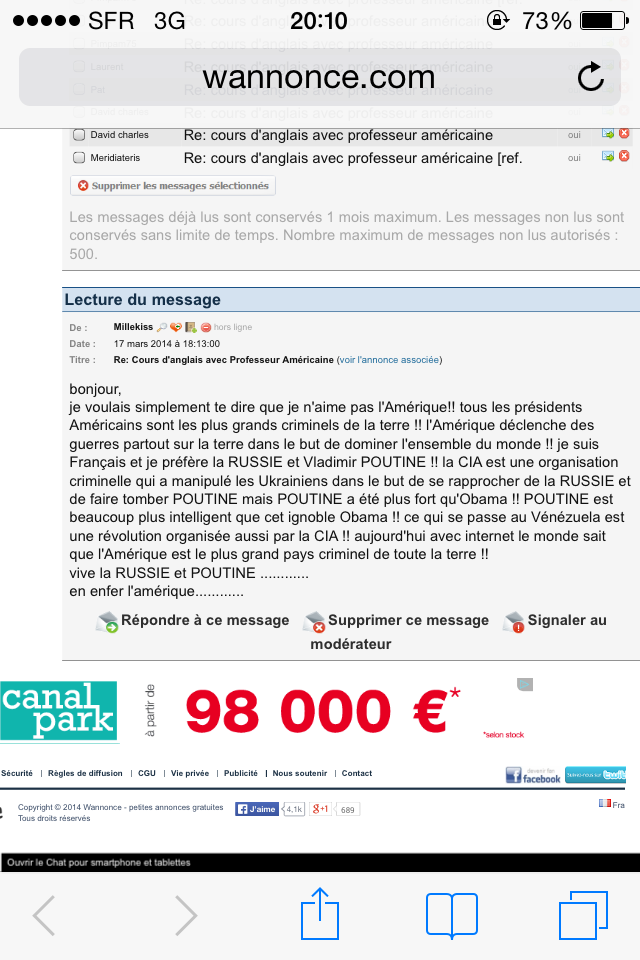 This is the original email, if you read French, you will get a kick out of it.

The "I don't care that you want to teach English, I just want to have sex with you" people

I AM NOT A PROSTITUTE!  I just want to teach English for 20 Euros an hour.  My ad is not some covert signal to all of the creeps in Paris that I actually want to get paid for sex, and that this whole English thing is just a front.  That's equivalent of going up to your local painting instructor and saying "come on, we all know what this is, drop the charade and come have sex with me."  Just today I was offered 200 Euros to have a threesome with some stranger on the internet.  I'm guessing there has to be some success rate among English tutors because people keep sending me these emails.

So there you have a few more stories of my experiences teaching English in Paris.  I hope you found some humor in my discomfort because I know I always do.  As I plan on continuing to teach here, I'm sure there will be more stories to come.

If you teach English anywhere in the world, and you have awkward/embarrassing/annoying stories, please share!  We can laugh and be happy that we haven't be murdered by a psycho yet.